Our pets can get adopted really quickly.
To view the current pets that are available please visit our Facebook page.
https://www.facebook.com/cqpetrescueinc

Here are just four successful adoption stories.
Perhaps, you will be our next one? 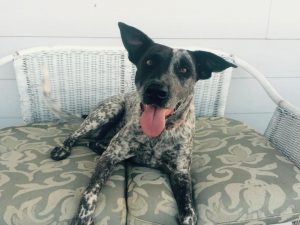 In 2015, Hannah saw the adoption profile for Abby, a blue cattle dog x.  At just one year old, Abby had already been badly neglected and abandoned, and needed a fresh start with people who would love her for the amazing dog she was.  Hannah instantly fell in love with Abby, and thought she would be a wonderful match for their other blue cattle dog Jax.

Abby was Hannah’s very first rescue dog, and was everything she had hoped and more.  Hannah describes Abby as protective, obedient and very affectionate, and she fitted straight into their fur family, with Abby and Jax being just like two peas in a pod!  She is still a little timid around new people, as a legacy of her days before she was rescued, but Hannah says a little reassurance is all she needs.

Hannah encourages anyone considering rescue to “just go for it!  Rescue animals really are beautiful; although they often have had a tough start to their life, they have their own little quirks and it makes you feel happy to see them happy – you might have to persevere but why not give them a second chance.” 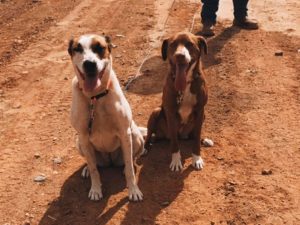 Tamsin is the proud human of Fi and Letty, both adopted from CQ Pet Rescue.

Fi was adopted in 2018 by Tamsin, who had recently lost her dogs to old age, and knew she needed a furry friend in her life.  Tamsin thought Fi would be a perfect fit, and Fi took to town life well, and then moved out to a farm.  Letty came into Tamsin’s and Fi’s family a year later, and Tamsin believes it was meant to be.  As soon as she saw Fi and Letty together, she know that they were a perfect match, and they became friends straight away.

During the time Fi and Letty have been with Tamsin, Fi has been bitten twice by deadly brown snakes, and Letty once as well!  All resulting in vet treatment and recovery, and certainly a great deal of stress and worry, and now both can serve as poster fur children for the importance of vet insurance!

Tamsin says that something she would say to anyone looking at adopting a rescue is to get a dog that is the right match for you and your lifestyle, be prepared to be patient, and to be willing to put the time into training them.  Accept if they have baggage, and help them move past it.

“I love my girls and I want to thank CQPR for helping me get them.  It has been a journey and a half but I wouldn’t change it for the world”. 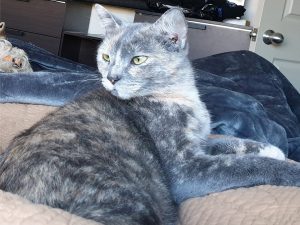 When Alexa and her family read Arya’s profile, they liked the sound of it so much they volunteered to foster her temporarily while her regular foster carer was on holidays. And sure enough, they loved Arya so much, they couldn’t bear to let her go, and decided to adopt her after two weeks.

Alexa says Arya is the sweetest and most affectionate little girl, who snuggles up to her human dad anytime he sits down. Everyone who comes around to the house is greeted with a meow and a leg rub, with demands for pats!

Alexa says that Arya’s description was 100% accurate, which was one of the reasons why she loves CQPR, it makes finding the pet for you so much easier! Arya has settled in so well, Alexa says she can’t imagine life without her. 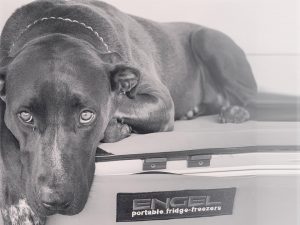 As soon as Jess saw Polly the cattle cross mastiff puppy jumping around on the family trampoline with her son when the family came to meet her, she knew instantly that this puppy was going to be a part of their family forever.

Polly came into care with CQ Pet Rescue at just six weeks of age, along with her mum and siblings. Jess was excited to adopt Polly, as they had wanted a dog for so long, but were never able to get one due to renting. Polly had proven to be the perfect addition to the family; she loves going on walks, licking people’s feet, chewing anything available, and going in the car for drives, but most of all just loves being with her people.

Jess says that anyone looking at adopting a rescue dog should definitely do it! “We don’t choose us pets, they choose us. Polly chose us (and anyone else who gives her attention!).”

And even now, four years later, Polly still loves a good bounce on the trampoline!